I haven't come up with a plan for washing dishes yet & I wake up dreading the thought that I'm going to have to engage with mountain of dirty plates and cutlery. A few pots of hot water later and I soon work out a system which is almost enjoyable and it helps pass the time.

Just as I'm about to tuck into another omelette for breakfast a seal pops its head out of the Liffey and casts a gentle eye over my island. He's got a beautiful, benign spirit and I feel blessed that he acknowledged my presence here.

At 12 I do a twitter interview with The Journal_ie. Somebody asks,'Given that you are only relating with the river what does it say back?'. I answer that the Liffey would like one lane of traffic on the north quays turned into a ribbon of green, a 3KM long park connecting the Phoenix Park with the sea.

Lunch is a bowl of instant noodles which taste amazing! Food seems to taste so much better when prepared & eaten outdoors.
In the afternoon I read some Robinson Crusoe (he's now in Brazil) and lie down and watch the clouds. I think I fall asleep for a while but when I come to I get an idea to write some statements about my stay in my book with a thick, black Posca marker. Each sentence covers one page and is therefore limited to a maximum of eight words. The sun is out and writing keeps me busy for a few hours.

I notice a young man has been watching me from the quays for quite some time, it's hard to make out what he's doing but later he sends me a message on twitter including a photo of the picture he was painting of my island installation. His name is Jason Purcell and he's a student at NCAD.

Twitter is amazing, I have never fully understood its reach until now. A resident of one of the apartments overlooking No Man's Land also sends on fantastic photos of my sandy knoll taken from her balcony. The absolute best thing about doing a project like this is that you realise how many genuinely helpful people are out there, dozens of people like Jason & Estelle have gone out of their way to assist my work. I'm incredibly grateful to you all.

Night falls, the lights on the Sam Beckett Bridge flicker on and I wash down my pasta with a couple of glasses of red wine (alcohol also tastes a whole load better in the outdoors!). 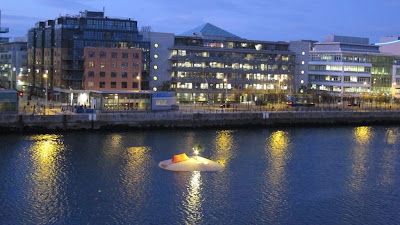 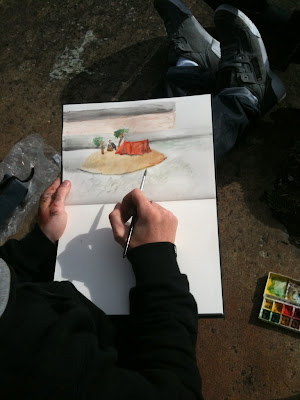 Dia Dhuit a chara. Greetings from Brooklyn. Donovan and I are taking great pleasure in reading your blog and looking at your beautiful shots. You seem very happy and I am reminded of that old Johnny Cash song, sung by the late, great Jeff Buckley: A Satisfied Mind . So delighted that your beautiful LIVE art installation is rocking.

Saw your island on my way home crossing the Macken St bridge after a long day at work. It looked so incongruous and lovely. It gave me a laugh and woke me up to other-ness of life, so I had to read your blog and it's great. Best of luck.

You're welcome - thank YOU for bringing something like this to Dublin. It was a huge surprise to me when I opened my curtains. I am used to spending some time on my balcony because sunset is always so nice from here, this week it's been even better. Enjoy your last night out there, I envy you!

I'm a tourist from Hong Kong and have been watching your performance the last couple of days during my daily commute along the banks of the Liffey.

Just wanted to give you my support and congratulate you on your endevours. You have really given additional life to the already beautiful river.