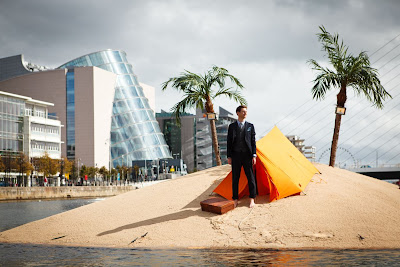 No Man's Land finishes up its temporary colonisation of the Liffey today. It has been an incredible experience and an enormous thrill to produce.

I am super grateful to everybody at ABSOLUT fringe who co-produced the project, especially Roise Goan who commissioned the piece and Helen Collins who chased down structural engineer reports, secured insurance and generally made all the tricky bits easy. Conleth Teevan did an amazing job with publicity, Wendy Dempsey made money magically appear when we need it, Tom Lawlor, Lian Bell & Marcus Costello were brilliant sources of advice, help and wisdom. Thanks also to Conor Mullan for joining the production team at the last minute. This is the second year that I have collaborated with ABSOLUT fringe, certainly on my part it's been a hugely rewarding relationship and I hope we go on to make even more exciting/complicated work together in the future.

Gareth Nihill and his team at NSpace fabricated the island, moored it, lent me a sleeping bag and a gas stove and were hugely central to the success of the work. I am in awe at Gareth's ability to multi-task, dive into the Liffey at midnight to secure anchor chains to the under carriage of the island and generally be brilliant. Also a big thank you to Colin at Surf Dock in the Grand Canal Dock who allowed us build on his premises and lent us his boat to moor the island on the river.

Dave Garvey, Karl & Jonathan manned the rescue boat and kept a watchful eye over me for the duration of the performance, God knows what they did to keep themselves entertained but I felt very reassured by their presence. Thanks also to the staff at the Jeanie Johnston for allowing the rescue team use their office and facilities.

Andreas Pettersson is an amazing friend, a brilliant photographer and has documented every one of my projects. He scaled office blocks, jumped in boats and knocked on apartment owners doors to find the best vantage points to capture perfect images of the island. Thanks also for introducing me to Albert Hooi who made a short film of the performance.

I am grateful to Dublin City Council and Captain David Dignam, the Harbour Master who generously allowed this project to go ahead on the Liffey.

The Irish Times and in particular Shane Hegarty has been very supportive of No Man's Land. The Times filmed a Youtube clip based on the project which has had thousands of views and I very much enjoyed writing a blog/island diary for the online newspaper.

Thank you Annie Atkins for designing my website and blog and uploading blog entries when my internet was temporarily down.

I spent six months searching for real palm trees (I'm not exaggerating!). Rather than wasting my time with Italian nurseries and the props department at PineWood Studios in London I should have looked a little closer to home as the perfect trees finally presented themselves at Urban Plant Life, a fantastic Garden Centre on Cork St, literally 3 minutes from my house. Thank you Sam for your generosity.

Richard Hegarty (GreenEarth Light) sourced the perfect LED lights in China, shipped them over, installed the lights and made the island look beautiful at night.

Amanda Coogan generously advised me on elements of the performance. Gareth at Indigo & Cloth sourced my costume. Cian O'Brien gave me his fabulous Liberty handkerchief. Thank you Peter Crawley and Alan O'Riordan for the music, Pat at StrEAT Cafe for impromptu invigilating and Anne Monk for delivering a pair of Blundstone boots from Australia, looking after my son and generally being one of the best people I know. Thanks also to Sinead Ni Bhroin, Peter Syms and Sarah at StillFilms for some last minute handholding. The art critic Gemma Tipton wrote an essay about the work and perfectly captured the concepts and ideas that informed the installation and performance.

Finally I would like to thank Christine Monk for being a world class sounding board. No Man's Land would never have happened without her steadying advice and patient counsel over the past six months xx.

Thank you everybody, I am the happiest I have ever been!