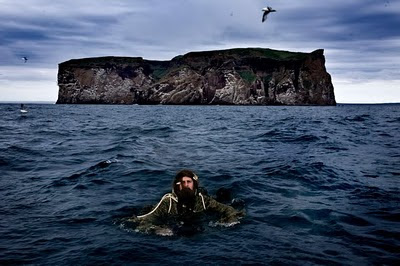 I had a residency with SIM in Reykjavik during summer 2008. I became interested in why the Icelandic Sagas still have a very pressing relevance and how the mythology of a country affects the make-up of any given race of people. I recreated episodes from three of the main sagas at their original locations. Andreas Pettersson photographed the resulting images.

This was the first image we worked on, Grettir was the most wanted, notorious criminal in Iceland during the Saga age. His bad luck mirrored that of Iceland's during it's dark, early history. He escaped to impenetrable Drangey, several miles off the north coast of Iceland, an island ringed by sheer, unclimbable cliffs. Eventually his fire died and he had to swim the long distance to shore through the chilly Artic ocean and bring fire back on the local farmer's boat. His enemies finally flushed him out and killed him.

I spent 4 weeks at my studio in Reykjavik researching the Sagas and making costumes, wigs and props. Andreas flew in from Dublin, we hired a car and set off north. The weather was sunny and clear the whole way from Reykjavik but to our disappointment Drangey was shrouded by the only cloud in the whole country when we arrived. Luckily there was a hot spring to sit in and wait while the cloud lifted. We hired the boat that brings visitors to Drangey to ferry us out within a mile of the island fortress. Much to the confusion of the Icelandic people on board, I jumped off the boat attired fully as Grettir the Strong. Enormous sea birds swarmed above me, the swell rose and fell, I tried to position myself to be photographed which was difficult as the drysuit I was wearing under the costume made me too bouyant. Andreas, the boat and thousands of euro worth of flash soared and plummeted beyond me. My woollen beard soon began to fall apart so we called it a day. Somehow we came up with this image.

The Burning of Njal's House 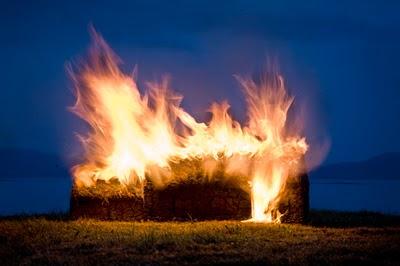 This is the single most famous event in the sagas. For every Icelander the burning has a resonance. I built a 2 metre model of the house using peat, resin, timber and lawn. My friend Louise O'Reilly flew over from Dublin for a one night visit to Reykjavik and together with photographer Andreas Pettersson, we set fire to the model near my studio at two in the morning. 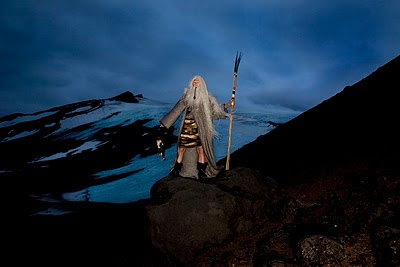 While on a previous trip in 2006 to the Snæfellsáss peninsula I met a man who explained his great passion for Bárðar, a saga character who according to the myth, inhabits the Snaefellsjokull ice-cap. Snaefellsjokull is 4744 feet, a dormant volcano rising straight from the sea. It is Iceland’s most famous mountain.

I researched the Bárður Saga further and set about making a costume and props and sourcing puffins. We took this image at 1am halfway up the volcano. 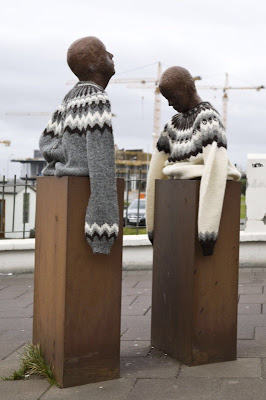 I became interested in the traditional Icelandic Lopi jumpers during my residency in Reykjavik. I liked the idea that a sense of nationality could be expressed through a garment and what that means (if anything)? I photographed all the public sculptures wearing Lopi jumpers in an attempt to question their relevance and reason.
Photography: Andreas Pettersson

Fascinating! I was looking for a visual aid of a burning hall and yours is beautiful! (Grettir's Swim is quite striking as well! Thank you!