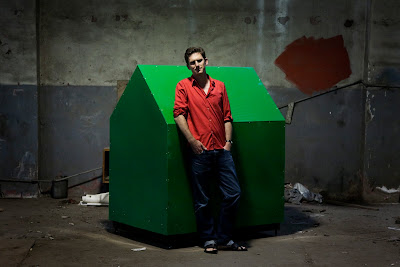 I've started doing some interviews to promote 'Liffeytown'. You can hear a replay of 'Artbeat', Dublin City FM's arts show with Des Fitzgerald from August 25 by clicking here.
It's a great programme and they also keep an up to date blog.

www.archiseek.com, a brilliant Irish architecture website have included an interview with me in relation to 'Liffeytown', read it here.

The Irish Times featured an article on 'Liffeytown' by Rosita Boland on Wednesday September 1. 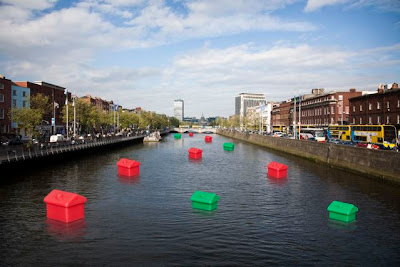 The property bubble floats once again on the Fringe of 'Liffeytown'
One of the more esoteric events of the Absolut Fringe Festival will be artist Fergal McCarthy’s Liffeytown . From September 12th to 26th, 11 temporary red and green structures will be floating in the River Liffey, between the Ha’penny Bridge and O’Connell Bridge. If they look familiar to you, that’s because at some time you’ve probably played with tiny versions of the Monopoly houses and hotels they resemble.

McCarthy got the idea from the “craziness of the development and lack of planning at the height of the boom, when apartment blocks were being built all over the city, particularly in the Liberties, where I was living at the time. It was a time of disposable architecture, with no vision or longevity,” he says.

It was also a time during which it seemed as if the planners, if they could have built on water, would have done so.

Now McCarthy is planning to do just that, with his river-based installation. “The Liffey is the central axis of Dublin, yet it seems strangely forgotten about. This is my way of redirecting people’s attention to the river.”

The structures, made of perspex with aluminium frames and buoyed up by polystyrene, will be lit from within with LED lights at intervals once darkness falls. “They’re about the size of garden sheds. I wanted them to look like they’re habitable, that people could almost get into them.”

Not that McCarthy actually wants anyone to get into them – or onto them. If you’re taking a trip on the Spirit of the Docklands boat any time soon – it is the one that plies up and down the Liffey every day – you’ll get to navigate through the floating red and green estate.

He’s not entirely certain yet what’ll happen when the backwash created by the boat hits the structures, but it’s unlikely they’ll sink as spectacularly as the property boom they represent.