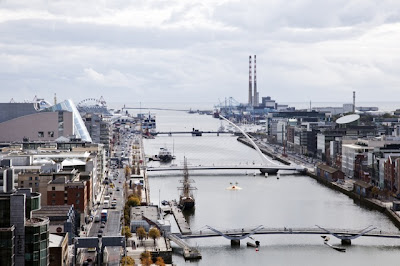 Pitched at an angle on a sandy-coloured mound in the River Liffey last weekend, Fergal McCarthy’s tent looked distinctly precarious, particularly given the looming threat of Hurricane Katia. In the event, Katia’s ferocity ensured that McCarthy had to temporarily quit his desert island. Prior to that, No Man’s Land became one of the most photographs sights in Dublin, not quite in The Temple Bar league, but drawing a steady stream of curious visitors with cameras and phones at the ready.

McCarthy ambitiously aimed to establish himself on his island for the duration of the festival. That’s a long time, and there are shades of Big Brother about proposing to live in the public eye for two whole weeks. Moored just inland of Calatrava’s Samuel Beckett Bridge, the island, sporting two palm trees as well as a small orange tent, is close to the Convention Centre and a host of other emblems of the boom and bust years. The Liffey widens down here to become a formidable expanse of water. It’s a tidal, working river with nothing recreational about it. It looks, frankly, daunting.

Last year McCarthy made a floating installation further upstream, between the O’Connell and Ha’penny bridges. A settlement of brightly coloured Monopoly houses appeared in the water, paying satirical tribute to the country’s ghost estates and other acts of property folly. Prior to that McCarthy, a keen swimmer, had swum three kilometers along the Liffey through the centre of town “in an attempt to bond with an adopted homeplace.” It seemed to work.

As you may have gathered, he aims to focus attention on the Liffey, which he regards as a neglected treasure, even with the advent of the boardwalks and the seawards development of Docklands. Any coastal city bisected by a river has distinctive characteristics, the main one, perhaps, exemplified by Dublin’s north-south divide, an opposition that gives an edge to the title of McCarthy’s project. His long-term strategy is aimed at prompting Dubliners to regard the Liffey not as a border but as a shared resource. He’s chosen a personally challenging but very effective way of doing so.

Brannmanndan said...
This comment has been removed by a blog administrator.
September 21, 2011 at 1:03 AM