'A River Runs Through It'

An essay by Peter Crawley 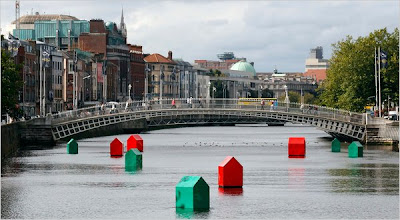 “You people who live in streets know nothing about the river.” Those words are delivered by a fisherman, a character in a short story by Guy de Maupassant, who admonishes the narrator with a tale of the rough majesty of the Seine.
The river, he says, is “a mysterious thing, profound, unknown, a land of mirages and phantasmagoria, where one sees by night things that do not exist, hears sounds that one does not recognize, trembles without knowing why”. Unlike the sea, the river does not roar but whispers; it summons not shanties or tall tales, but poetry and misty secrets. By and by the fisherman recalls an eventful night, when, anchored and mysteriously unable to move, he spends the night on his exposed boat. Watching the world around him, he sees it change from overlooked magnificence into something suddenly cold and sinister, then finally, just as unbidden, into a realm of otherworldly beauty and possibility. (We should mention he has a bottle of rum for company.) But though the story ends with a chill, its purpose is to show the force of change, transformation, flow. It is called, simply, On the River.
For two weeks last September Fergal McCarthy’s Liffeytown, co-produced with the Absolut Fringe, seemed to tell its own story. On the surface, it was simple in concept, but its commentary lapped steadily at our street-level consciousness, its wit illuminating the days, its beautiful glow bringing gentle intoxication to the night. Crossing the Liffey can be a thoughtless experience, undertaken without patience or cognition. But now I found my footsteps slowing and stopping, charmed by the eleven familiar structures bobbing in green in red between the Ha’penny and O’Connell bridges.
Those Monopoly houses and hotels were at once satirical and consoling: an arch statement on the city’s recent history and the nation’s ingrained, ruinous obsession with property, they reduced the complexity of the market to something as beautifully simple and cyclical as the level of the tide. It may fall as well as rise. This may have seemed like an obvious point, but it was more eloquently made than any economist or commentator and certainly more playful. It supplied the visuals for what was on our minds and the tips of our tongues. Understandably, images of the installation accompanied news articles on Ireland’s economic woes everywhere from The Irish Times to The New York Times, The Guardian to La Stampa, an immediate symbol of the bust, the sudden, inevitable arrest of our prosperity. Do Not Pass Go.
The attention was welcome but it missed another, better point, something more constructive than what Maupassant’s fisherman calls “the most sinister of cemeteries”, something more pure than a punch line. At the same time as it marked the end of development folly, it recalled a game from childhood and the pleasures of toy boats in a pond. At night, when the fibreglass constructions glowed like red and green lanterns, you might have thought it a vigil, but that glow seemed more reassuring. Another ghost estate, maybe, but clear evidence of the capability of art to create, rebuild and reconnect.
Born in Limerick and moving to Dublin in 2000, Fergal McCarthy has long been fascinated with the Liffey. It is the artery of the city, the original source of transport and trade that allowed Dublin to develop. But somehow it has been neglected, lined with a three-lane motorway on either quay, overlooked and ignored by modern flows of capital and information. (You don’t find a river on any Monopoly board.) In 2007, McCarthy swam a 3km stretch of the river for a project entitled Liffey Swim, which seemed like an eccentric gesture; an individual connecting with a neglected waterway that could seem inhospitable even to Millennium Clocks and shopping trolleys. But here again his intervention steered attention towards something so obvious it had become invisible, a contour of the city as unconsidered as the roofs of buildings for hurried daily commuters looking straight ahead, never down or up.
Liffeytown, which had been planned for the best part of two years, had actually started out as a statement on the boom, a symbol of a city adrift in reckless greedy sprawl. The idea of Liffeytown barely altered, but its context shifted utterly and there remains something humbling and cheering for the meaning of art in different circumstances. First it’s a warning, then it’s a satire. Here a call for community, there a ghost estate. It could be different things at different times, its emphasis shifting with each perspective. You can’t put an installation into the same river twice.
But you can address it. Whether it came to blast the boom or draw a line under its collapse (prematurely, perhaps – the IMF came to town two months later), Liffeytown’s real agenda was to draw our focus back to the river. How I saw the city, and the nation, changed each time I approached McCarthy’s surreal flotilla, disarmed by its delightful incongruity and jolted into different feeling and deepening consideration. It was simple but brilliant, it raised a smile and brought a chill, its message seemed urgent but its delivery serene. Maupassant’s fisherman would raise his bottle to that testament of inexorable change.
And still it had another satisfying paradox. As a piece of public art, inspired by the iconography of materialism, you could not acquired it, yet you felt you were living in it. There it was most stirring, most stimulating. After what felt like the nation’s last roll of the dice, these floating Monopoly hotels and houses arrived to the Liffey with a serene truth, that of great art, showing that a city could be reflected, certainly, but that it could also be transformed.

Peter Crawley is a Journalist and Critic