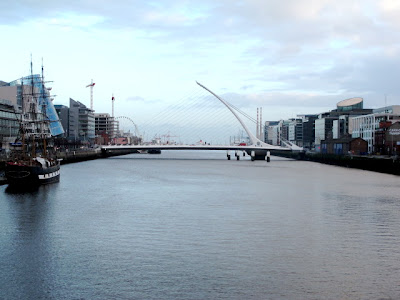 No man is an island… and yet haven’t we all had dreams of escaping to one? At the heart of this fantasy is a web of security and isolation, where the threads are made up of the boundaries of water, and the separation of a small piece of land from the space of our daily lives. So when enjoying our own dreams of leaving, and indulging our escapist fantasies of eluding the everyday, where do we go? To the Maldives? Madeira, Inis Mor, or into our own heads? Whether it is at two thousand miles distance, two hundred, or simply reached by a closing of the eyes; part of the seduction of the idea of an island is to follow the Persian saying: “I am there from where no news even of myself reaches me.” Sometimes art may bring us there too.

So, imagine an island appearing overnight where no island has been before, in the midst of the Liffey’s tidal waters, where the river widens and flows past half-built Docklands developments, and on to meet the sea. Complete with sand, a tented dwelling, even palm trees; Fergal McCarthy’s constructed oasis focuses layers of thought and idea into one small and powerfully unexpected space.

It is the incongruity that first strikes the mind. What is a desert island doing in the sluggish Liffey waters? Look a little longer though, and maybe start to wonder whether it is any less incongruous than those half built edifices that rise alongside the river. Those broken teeth in the once brightly smiling mouth of Docklands’ promise were sold as a new way of living and working. The apartments looking down on to McCarthy’s fantasy island were marketed as little personal spots of paradise. They were part of a shopping list of dreams, which may have included yachts, exotic holidays, even private islands as a personal playground. Now, freighted with negative equity the apartments are, like Robinson Crusoe’s island, beguiling from a distance, and, on closer inspection, traps.

There is a flip side to the idea of unadulterated luxury embodied in the paradise island. The island is a place apart, where one might find space to think, and to be. Captain Woodes Rogers, who rescued Alexander Selkirk, the model for Daniel Defoe’s Robinson Crusoe, was struck by Selkirk’s self possession and fortitude, writing that "One may see that Solitude and Retirement from the World is not such an unsufferable State of Life as most Men imagine". Musing on this, Patrick Kavanagh was less convinced:

I have what every poet hates in spite
Of all the solemn talk of contemplation.
Oh, Alexander Selkirk knew the plight
Of being king and government and nation.

Solitude and retirement may not be comfortable, but they are good for contemplation and creativity. Islands are also potent spaces for imagination. Away from the world, we can project thoughts about how we might live, were we given the space to be better people, onto distant islands. Islands may, in fact, be good for the soul.

On a desert island, fantasy and reality, place and non place, excess and asceticism intersect. If paradise is a place of perfection, synonymous with both lost perfection on earth, and the promised perfection of heaven, it is also implicated in ideas of utopia. Utopia, Sir Thomas Moore’s description of a fictional island with a fictional perfect society, translates through Greek either as “good place” or “no place”, raising the question of whether paradise can actually physically exist at all. And, while we may seek paradise in the good places of holiday islands; holiday resorts themselves are described by philosopher Michel Foucault (along with islands, ships, prisons, asylums, graveyards, and boarding schools) as ‘heterotopias’.

The heterotopia, for Foucault, is one of those places outside society, a necessary counterbalance to the idea of Utopia, a safety valve for paradise; a place, or places, where the elements of dissent, of ‘otherness’, of necessary yet potentially disruptive process, can take place without causing damage to the societies that harbour them. Heterotopias are holidays, honeymoons and sea voyages; they are events as well as places, to which we can travel, and from which we can return – our deviant or alternative impulses satisfied – thus ensuring the continuity and safety of society’s structures. “Brothels and colonies,” writes Foucault. “Here are two extreme types of heterotopia.” So too is an island, a place where you can go and be someone other than yourself.

“Think of the ship: it is a floating part of space,” Foucault continues. “A placeless place, that lives by itself, closed in on itself and at the same time poised in the infinite ocean, and yet, from port to port, tack by tack, from brothel to brothel, it goes as far as the colonies, looking for the most precious things hidden in their gardens… The ship is the heterotopia par excellence. In civilisations where it is lacking, dreams dry up, adventure is replaced by espionage, and privateers by the police.” Looking at McCarthy’s islands as a heterotopia, it becomes a focus for all the things we thought the boom could bring us, and a site for all that remains at our disposal now that the money is gone.

Of Land and Water

They say you can never step into the same stream twice. The onward rushing of water makes every river always different, at the same time as all rivers are not equal. There is poetry in the idea of the Nile, while the Danube is all about music, but what of the Liffey, where McCarthy’s place, non place, utopia and heterotopia is sited? James Joyce was fascinated, even if Dublin City itself is not. One of the reasons for this is that, like so many other historic cities, Dublin’s central river was once also the central sewage system, a place for all the waste we would rather forget. That’s why Dublin tends to turn its back on the river, even if there is no longer a good reason for it. Nevertheless, rivers were also the beating hearts of cities, and the arterial routes that brought trade in, and adventurers out.

Now the arteries along the Liffey are the Quays with their three lanes of lorries, busses and cars. Can you picture the Quays without traffic? This is something McCarthy tends to do, imagining life back into Dublin’s signature river. Fascinated by the Liffey, he has swum it: Liffey Swim (2007); placed Monopoly houses in its waters (LiffeyTown, 2010); and now he is going to live in it, and on it – building his own desert island at the point where the new Sam Beckett and Sean O’Casey bridges have done their work to unite the North and Southside tribes.

Neither North or South side itself, McCarthy’s island is an unreal place, and it only has room for one. It is definitely better that way. Most escapist fantasies are solitary adventures of the imagination. We picture ourselves on deserted beaches, alone in idealised landscapes and there is always a boundary of some sort: the island surrounded by sea, the enclosed garden, there is even the garden shed. While this gives us a sense of safety, it also concentrates the quality of the daydream: here, within these bounds, perfection becomes potent; an intensification which may also occur within the borders of the picture frame.

Art is, perhaps, the most apt means of investigating paradise, because if paradise is solitary, impossible (because we always find ourselves in it), and only attainable through imagination, then the best place to experience it is through art. And experiencing art is a solitary thing. We may go to galleries in couples or in groups, but the engagement of person with painting, or sculpture or print, is a one-on-one process, a break from contact with people that Nietzsche describes as vital to the human spirit: “That is why I go into solitude, so as not to drink out of everybody’s cistern. When I am among the many I live as the many do, and I do not think as I really think; after a time it always seems as though they want to banish me from myself and rob me of my soul.”

Art experienced alone in this way casts a spell that is often diluted in the mind by those inevitable questions that come to pluck you from your personal reverie. “What did you think of it?” “What do you think it meant…?” Trying to put mood and feeling into words, the magic of paradise is ruptured and you are returned to the world. So what is McCarthy planning to do on his temporary island in the watery heart of Ireland? Away from the world, in the secure isolation of his island, he is planning to return to an earlier love than the Liffey, he is planning to paint.


Gemma Tipton is an independent writer and critic of contemporary art and architecture. Based in Dublin, she contributes regularly to art and architectural publications, panel discussions, lectures, radio and television programmes in Ireland and internationally. Reviews, features and interviews are published in The Irish Times, Art and Architecture Journal, Artists Newsletter, Irish Arts Review, CIRCA, Fuse, Irish Museums Journal, Selvedge, Apollo and VANS. She has been manager of CIRCA Magazine and editor of Contexts. Gemma has also been a judge for the Museum of the Year Awards, and for the AIB Prize.