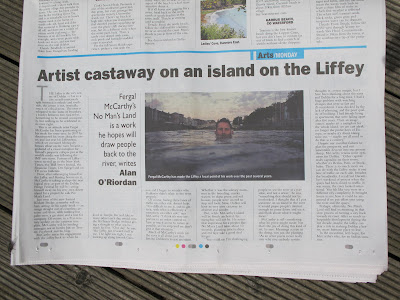 The Liffey is the very centre of Dublin - but in a city so self consciously split between northside and southside, the centre is not, ironically, much of a focal point. The river is relegated to the status of boundary, a border between two rival tribes. Something to be crossed occasionally, but nothing to be celebrated in its own right.

This is an attitude artist Fergal McCarthy has been questioning in his work for some time. In 2007 he documented his swim along the river, and last year his Liffeytown, which set oversized Monopoly houses afloat on the river, became a godsend of a visual metaphor for Ireland’s property collapse just as the World’s media was following the IMF into town. Pictures of Liffeytown turned up in the NewYork Times, the Wall Street Journal, the Financial Times, Der Spiegel and on TV News Bulletins.

Now, after submerging himself in the Liffey, and floating houses on it, McCarthy is taking perhaps the next logical step: as part of the Dublin Fringe Festival he will be casting himself away on his very own desert island for a project he calls No Man’s Land.

Just west of the new Samuel Beckett Bridge, passersby will see him, sitting on his sandy knoll - an image straight out of countless cartoons and films, with nothing but palm trees, a gas stove and a tent for company. Of course, in a a 21st-century update on the castaway template, McCarthy will be sending messages not in bottles, but on Twitter, Facebook and his blog.

McCarthy traces his engagement with the Liffey back to when he lived in Temple Bar, and, like so many others each day, would cross the Ha’Penny Bridge without giving a thought to what was beneath his feet. “One day,” he says, “the Liffey just revealed itself to me. The light was right, I was looking up along towards Guinness and I began to wonder why Dubliners didn’t relate to the river properly.”

Of course, having three lanes of traffic on either side doesn’t help. “It is difficult to see it, and to get to it, with what is effectively a motorway on either side,” says McCarthy. “I think it’s very important in an urban context to have as much access to nature as possible , so I’m surprised we don’t give it that much attention.”

Much of McCarthy’s work on the river is all about just that: forcing Dubliners to pay attention.

Whether it was the solitary swimmer in the brooding, murky waters, or those green and red houses, people were invited to stop and look. Now, Dublin will have its very own castaway to observe and ponder.

But, while McCarthy’s island will be firmly anchored, his metaphor will not be. He notes that inspiration for a project like No Man’s Land takes about 10 seconds; planning, practicalities and red tape take a good deal longer.
“You could say I’m challenging people to see the river as a paradise, and not a sewer,” he says, “something that should not be overlooked. I thought that if I put someone on an island in the river it would pique people’s interest enough to come down and see it, and think about what it might menan.”

McCarthy is still considering what his piece might mean: but that’s the joy of doing this kind of art, he says. Meanings accrue in the doing, not just the planning. “As an artist you’re never really sure why you embody certain thoughts in certain images, but I have been thinking about the river for a long time. I jad a huge problem with watching changes that were so fast and ill-considered. I was shocked by the lack of planning and the poor quality of building. I had friends living in apartments that were falling apart after five years. Then an image comes: maybe it’s a metaphor for the whole island, we are cast adrift, no longer the poster boys of Europe; or maybe it’s about taking time out - maybe we all need to do that as a country.”

Despite our manifest failures to plan for prosperity, and our lamentable descent into our present slump, McCarthy retains some optimism for Dublin. “Other capitals really capitalise on their rivers, whether it’s Berlin, Paris or Stockholm. There is so much we can do with the Liffey: make it one lane of traffic on each side, broaden the boardwalks, I recall last December’s weekend of protest when the quays had been closed to traffic. It was sunny, the river looked sensational. You felt like you were in a different city completely. It brought home to me how it could be improved if we put effort into using the river and the quays.”

Perhaps, ultimately, No Man’s Land will find its meaning in that slow process of turning a city back towards its river. After so much inhospitable development during the last decade, maybe the Liffey can play a role in making Dublin a better, more humane place to live.

In the meantime, let’s hope, for McCarthy’s sake, for an Indian summer.

hi. great photo in the paper. really looking forward to it. best of luck with the build!